Welcome to our friend Samanthya Wyatt!


She has an awesome new book out. Lets have a look. Take it away Samanthya.

Thank you Sarah and Shannen for having me here today. I appreciate your helping me celebrate the release of book 2 in the ‘One and Only Series’.Ever since I can remember, I’ve loved curling up with a book. When I was young I wrote poems and short stories. When I graduated, my life changed. I married a military man, traveled across the US and abroad, settled in the Shenandoah Valley and had a family. Then I found romance novels. I fell in love with the characters and needed to know their happy ending.When I couldn’t afford to buy them, I wrote my own stories. I’ve taken every workshop I could to improve my writing. I’ve entered many contests. I joined RWA and joined several chapters. Savvy Authors offered a pitch contest with several editors, agents and publishers. Coming up with a pitch—25 words or less—is extremely difficult when you’re in a group with thousands of other authors. But I got the attention of 3 editors and two different publishing companies. My dream paid off. I signed my first contract with Soul Mate Publishing.My characters are fictitious. I have taken real life experiences to achieve the emotion on paper for my characters. I do a lot of research for the time period, studying the lingo / slang and culture. With appropriate details, hopefully I put the reader in the setting.I find that I get a lot more accomplished if I just sit at the computer and write. As long as I write something, I just keep going. Later I can delete or gather tidbits together. And I have deleted whole chapters. But if I want my story to go somewhere and be a good MS, there has to be GMC. I learned this from many workshops. I learned how to do character sketches, GMC charts, plots—everything one needs to bring a story together.
I’m so excited to talk about “The True One” my sequel, book 2 in the One and Only Series. In the first book of the series, “The Right One”, Katherine’s brother is missing. Book 2 is Stephen’s story—“The True One”.His ship in splinters and his men captured, Stephen is a broken man. Yet the torture he received by his enemies is nothing compared to the torment he bears from an angel with lavender eyes.Jennifer left England full of a young girl’s fantasies of romance and adventure. When she cares for a near death captain, memories emerge of the family she left behind. Will the passion they share be enough? He must choose – her or revenge. My first submission to an editor resulted in a rejection. Being a beginner, I was not surprised. And I didn’t let it get me down. The thing that impressed me the most was a comment—what happened to the brother? She told me the story had holes. All questions needed to be answered.So I worked on my story, but decided Kat’s brother was a story all by itself.So the sequel, book 2, is about Kat’s brother. Why he was gone for two years, what happened to him, and a love story all his own.Is there a book 3? Of course. The third book in the series is about Giles. He was introduced in the first book as Morgan’s best friend—the duke. In the second book, he is asked to rescue Stephen.My characters in all of my books are fictitious. However, I have taken real life experiences to achieve the emotion for their situations.Find out what happened to Kat’s brother in the thrilling sequel of the One and Only series.

The True One - Captain Stephen Radbourn accepts an intriguing proposition which results in horror. His ship in splinters and his men captured, he is a broken man. A band of rebels rescue their leader from a dungeon, taking the near dead captain with them. Fearing capture and thinking the tortured man will die, they leave Stephen in the care of a woman, who he believes is an angel of mercy. A man of passion, with a trail of satisfied maidens to prove it, he finds his heart captured by the lovely widow. But she forces him to choose—her or revenge. Jennifer Faircloth departed England full of a young girl’s fantasies of romance and adventure. Her young husband dies leaving her a widow to survive alone in a foreign land. When a near death English captain is dropped at her door, memories emerge of the family she foolishly left behind. While caring for him, her curious imagination turns to an overwhelming awareness she cannot deny. He must flee for his life and he takes her with him—back to England—back to the family she’d deserted. She wants her family to forgive her, but she wants Stephen’s love even more.I love to hear from readers.
Please visit my website here:  www.samanthyawyatt.comI invite you to lay the worries of the world off your shoulders and get lost in the pages of a romance, where you embark on a journey with the hero and heroine, become involved in a dream, plunge into a world of fantasy, and live an adventure your heart can share.

Enjoy an excerpt from The True One:

He was dead.He had to be. For serenity enclosed him. Fresh air cloaked him. A cloud of softness wrapped him. Comfort would mean he’d gone to heaven, when he had been destined for hell. Slowly, Stephen became aware of soreness, then stinging, then blinding pain. Sure signs of hell.The lilting voice of an angel drew him to an unbelievable place of calm. The honeyed sound soothed his mind to a state of ease. Alleviating his anxiety. Diminishing his pain. The most enchanting dream he’d ever held. He opened his eyes with excruciating sluggishness. The first glimpse of light splintered his skull with a sharp stabbing. He slammed his eyes closed with a long groan. He’d been denied sunlight for so long, he thought never to see the light of day again.His insides still stuck to his backbone. He breathed as deeply as his broken ribs allowed, then grounded his teeth over the agonizing ache. Slashing pain shot through his jaw stirring more memories. Oh yes. That had been broken too.A bed? He took a moment to grasp his surroundings. Unfamiliar hands. Gentle hands. He thought he’d felt movement at one time, dreamed he was in a wagon. Flashes of torture penetrated his skull—men with curved knives and jeweled handles, shackles, a pit for a prison cell. He struggled with the bonds squeezing him when the sweetest sound of an angel pulled him from the dark fog. Reassuring hands swabbed a wet cloth over his feverish skin and coaxed him to swallow. Blessed relief to his parched lips. Now he lolled in a bed.With a sense of unease he pondered his situation, wondering what state of play brought him to this consequence. He inhaled, taking in pleasant air. No stench. No slimy creatures. Where was he? At this point he didn’t care. As long as he no longer suffered the Raj’s torture.Slowly, and more cautious this time, he lifted one lid to a narrow slit. The swelling around his eye had gone down considerably. He glanced down to find a hand-sewn quilt, like the ones his mother made. Definitely a bed. Which also resembled his English heritage. Had he somehow been transported back to England?He rolled his head against the pillow’s softness. His mind wandered restlessly through a mirage of shadows. His ribs were on fire. He searched the room. A window stood open and the thin covering wavered as if the wind blew gently to make it dance. A crude piece of furniture beyond the bed with items scattered about. To the right a door. He wondered who was on the other side. Friend or adversary? He closed his eyes for a moment, seeking relief. Ignoring the pain in his skull, he turned his head to the right and saw the delicate creature in his dream. An angel of mercy, with dark hair falling about her shoulders. Long sweeping lashes brushed velvety cheeks. Instant awareness surged through his body. At least the devils hadn’t killed that part of him.On the heels of that thought, he wondered if she were a maid or the wife of some possessive husband. If she were his wife—perish the thought—he would never leave her alone in any room with a strange man, incapacitated or no. Especially not in close proximity of a bed.And he was naked. Bare as a new baby’s bottom.

Sweet Fire is out!! Woot!

It's release day! Sweet Fire is now available in both ebook and paperback formats on Amazon, Barnes and Noble and direct from Dreamspinner Press.  Woot!

Check it out and come visit us on our blog tour.  Today we have an interview on www.queerscifi.com and tomorrow we take over the Dreamspinner Press blog for a full day of book release excitement and a yummy giveaway.  Don't miss it.

Buy on Barnes and Noble 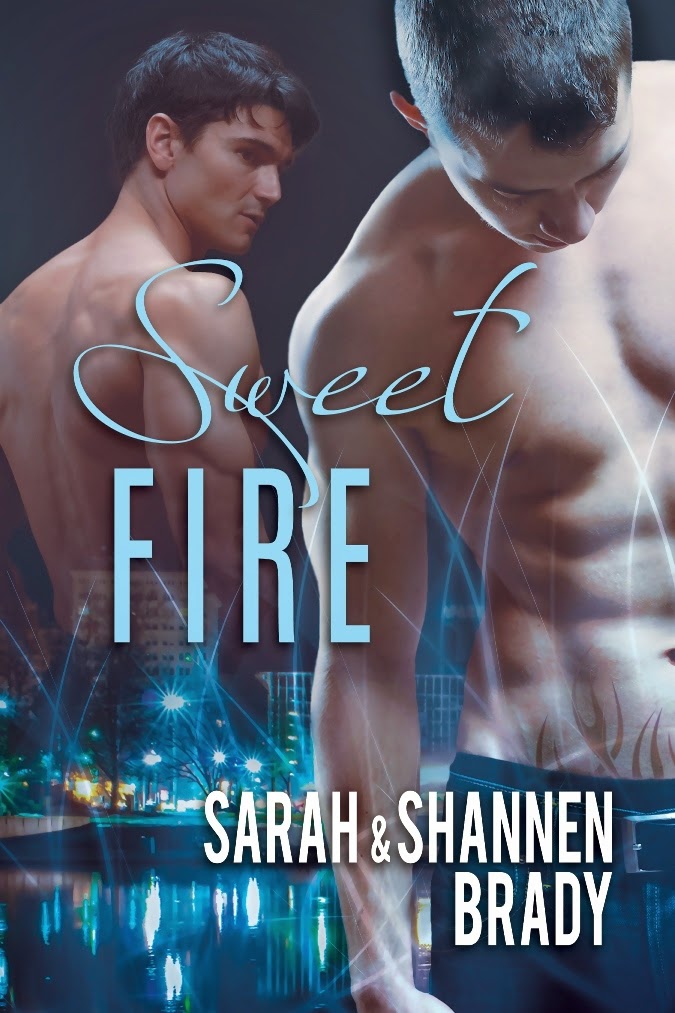 Between Homeland Security's Gifted Agenda and the bigotry of a fearful populace, having paranormal Gifts is a dangerous thing. Pyrokinetic Aaron Flores knows firsthand how difficult it can be to control his power. Still, he runs his bakery and never gives up on finding his Happily Ever After. When Aaron's cousin asks him to check on her former EMT partner, Aaron’s chance has finally arrived. He's determined not to let anything stop him from catching (and keeping) his man.
Ramón Del Rio spent three days at the tender mercies of HOMSEC agents when his former partner was taken. He wants nothing to do with a Gifted guy, but Aaron is nothing if not persistent. He's a pastry chef after all, and the way to a man's heart really is through his stomach. The physical passion they share is the icing on the cake. Just when Ramón decides that having Gifts might not be a deal breaker, someone close to Aaron decides his fire needs to be put out—permanently. Ramón will have to face his fears to save them both.
﻿
Posted by Shannen K. at 8:48 AM No comments: